Full of something … maybe metaphors

I find myself coming somewhat full-circle, or perhaps at least semi-circle, on these training rides. Now I feel like I can actually say “training” instead of “so-called training” because doing what I’ve been doing is preparation for what lies ahead this weekend.

Monday, my 52nd birthday, I found myself laughing instead of “riding negative. I had to snicker upon hearing Mike D. rap on my playlist about letting the beat drop at the exact spot where I did that earlier this summer. I fell off my then-new road bike onto the pavement, though it’s been a minute since that happened, and howled at my own expense.

I’ve been learning along the way. First of all, there’s a process to watching what I’m doing instead of worrying so much about what’s going on around me; i.e. the trash on the road that drives me to distraction. Sometimes there’s a price for being distracted.

An overarching lesson I’ve learned is to tuck in the elbows from these T-Rex arms and coast downhill as fast as possible to gain momentum on the next one. I think of that every time I’m trying to surmount an incline and hope to ride out most of it.

Monday gave me the simple epiphany of, “Don’t look up that hill.” I approached from a slight incline, grasping to gain that extra tiny burst of energy it’d provide, perked my ear up for any oncoming traffic, then braved a corner to slowly creep up to the top of that next mountain (actually, a hill). And I conquered that damn hill for the first time. That’s when I accepted the metaphor for the whole marathon. Just. Quit. Looking. Up. The. Hill. You’ll get there somehow.

I’ve been having fun as well, even if I didn’t think I might at first. My friend and I have learned we can at least laugh at ourselves. Those hills look so much easier from behind the wheel of a car. 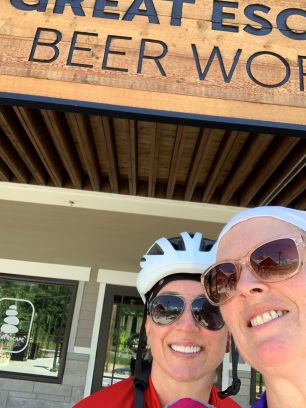 The marathon going to happen whether I dread it or not. But I can do it. There’s no use in being afraid of what’s to come. Much like eating an elephant, you take it one bite (hill) at a time. I’ve often used that analogy on my students and now have to own it.

My favorite part so far has been when I’ve listened for approaching traffic, thinking I’ve heard approaching tires, and then realizing it’s the sound of my own. My own tires and my own power propelling me forward. It’s happened twice, much to my delight.

While this hasn’t been easy, there’s no EASY button from Staples like I’d wish, it’s gotten easier. Not much in life is easy, but seemingly requires less stress-filled effort with time.

My muscles being stronger, the slow emergence of quads and calf muscles, has made those hills do-able. Monday’s ride through the park was my cool-down instead of the first leg of each short journey like it was back in May.

So in hopes I’m not full of shit, just metaphors, I stare at this weekend full of hope and a little less fear, dare I say maybe even excitement.