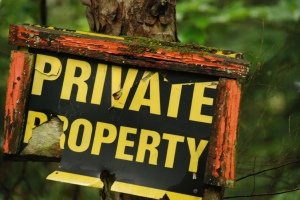 Weeds grew high enough to almost completely obscure sight of the decrepit house from the road. Vines crawled up the windows and kept whatever lurked there out of view if anyone dared traverse the length of driveway and spy inside the grimed-covered windows. Decades of cigarette smoke left a yellow filth to glaze the panes, almost as if on purpose. An unsuspected outsider might peek into the lives of the building’s former residents and gain insight into their previously secret details.

Those intimacies were likely best hidden away, out of the visual perception of an otherwise unknowing public.

Two sets of eyes peeked up over the rotting wood of the sill. A small hand wiped at the grime, its owner not realizing the action’s futility. Even industrial-strength cleaner would require considerable labor to remove it. Aiden asked his brother, “What’s in there, Kyle?”

“I can’t tell,” came the reply, with a strong shushing. “There might be somebody around, and we’re dead meat if we get caught here,” Kyle admonished him. The boys’ parents warned them about snooping around the property. The place looked abandoned, but technically they were still trespassing.

Aiden whispered back, “Maybe we should go home.” He stifled a pained howl and grasped his arm when Kyle punched him and accused, “You’re just being chicken. Come on. We’re finding a way inside.” The boys crept around to the back door for a better look. Inching through chest-high foxtail, they were fairly well-hidden in their clandestine approach. With the sun setting in the west, the growing darkness worked in their favor.

Choking back tears, Aiden followed his brother at arm’s length. He’d do anything Kyle told him to but wanted to avoid getting hit again. He clambered up the back porch steps, his short legs not as nimble, and bumped his head into Kyle’s rear end when he stopped short.

The boys’ eyes widened when they heard movement coming from the interior. Older kids on the school bus said no one lived there, that the old man had died years ago, but everyone held their breath as they passed the ramshackle building each morning.

Aiden jumped up, adrenaline overcoming his lack of agility and preparing him for flight. Not quite old enough to go to school, he’d only gotten the ghost stories second-hand. Those legends scared him, and he was ready to run home regardless of their house being the length of two hayfields away. He’d wear out the soles of his little brown boots making tracks all the way back.

Kyle caught his shoulder and lowered the kid to crouch beside him. They hunkered below the nearly opaque door glass and listened intently. Being on the east side of the structure meant shadows spilled longer and cast an eerie backdrop to their perch atop the concrete stairs. Both of them realized how worried their mother would get with dinner-time fast approaching.

His nervousness already a hindrance, Aiden began to whine about having to pee and shouldn’t they leave already. He wasn’t having fun anymore and begged Kyle to listen to reason.

Another thump came from inside, closer this time, along with the sound of something sliding across the floor. Yet another clomp and more sliding. Aiden began to cry anew, while Kyle continued to hush him. Both boys froze in terror as the noise got louder the closer it drew.

The two sat transfixed, knees touching and arms locked around each other in automatic and instinctive support, staring into one another’s saucer-like orbs. “Your eyes look just like mine, Kyle,” Aiden said quietly. They seemed to peer into a mirror as similar as they appeared. The momentary respite vanished when the noise commenced again.

The clomping slowly but assuredly approached the door. Each stomp and slide frightened the boys to their cores. It came closer and closer.

Aiden gasped for breath, increasingly labored and ragged at every inhalation. Kyle whispered, “Shhh, Aiden, shhh … we have to be quiet.” He clung to his brother.

They both flinched when a bare light bulb flashed on above their heads and something crashed into the opposite side of the door. Springing to their feet and ready to flee, the pair stood facing the oldest man they’d ever seen in their short lives. The man was stick thin, cheek bones jutting out from either side of his gaunt face, with only a few straggly hairs on his sallow head.

He could’ve been a skeleton for all they knew, but they imagined him the dead come back to life. The man slammed his walker into the adjacent side of the door and shook its cracked glass. He yelled, “Get off my porch, you damn kids! Get outta here. It ain’t Halloween!”

The younger boy was first down the steps, with Kyle close on his heels. They sprinted down the driveway, dust clouding up behind them but nearly invisible in the darkening night. Aiden’s pointed-toe boots were blown almost clean of it by the time he reached their own porch. He ran so fast he’d forgotten his previously urgent need to relieve himself. The front of Kyle’s blue jeans, on the other hand, were dark from having the piss scared out of him.

The Studio 30+ prompt “best hidden away” was originally offered by Tina.