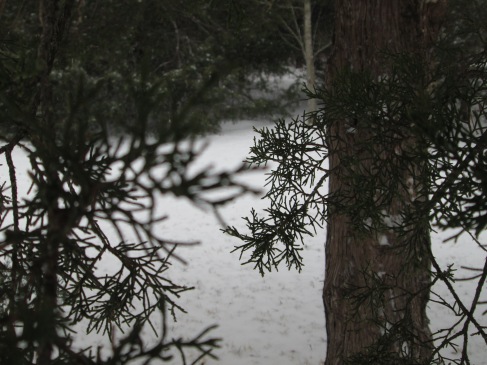 An old, threadbare dress hung in tatters above her on the clothesline. It would take no time to dry in the fierce wind atop the hill where they lived. The biting breeze seemed to blow through the fabric of her coat and nip into the bare skin of her neck. Elizabeth thought of the tough luck she accepted marrying a Johnson and moving where the elements so mercilessly wore upon their lives. Her soul suffered the same treatment as the clothing on the wire stretched there between two posts.

Her memory went back to the days that frozen diapers on the line in wintertime would snap in two when removed. With no money for essentials, there was certainly none for extravagances like a clothes dryer. They were lucky to have laundry detergent and soap for bathing. Elizabeth’s red hands were worn raw from hanging wet garments and linens in frigid temperatures. Drips of water almost froze before touching the ground.

Elizabeth spent the time outdoors as a respite from the chaos inside the house, as her toil was never ending. Getting pregnant the first time seemed to lock in her fate as a homemaker, and submission to her overbearing husband brought along three more little ones thereafter. Those children were her heart. She loved the little buggers but wanted more out of life than making supper and cleaning up after other people. At least a little break in the day-in-day-out chores to which she seemed destined.

One of her boys, who suffered a broken neck from an ATV accident with a neighbor, would spend his adulthood on disability, while the other two stayed close to home working minimum-wage jobs like their daddy’s. She marveled at more privileged women, their big cars and nice clothes. A front-loading washing machine. Elizabeth lived out her dreams vicariously through others.

She wanted more for her daughter and stashed away a little cash each time the pittance of grocery money was doled out by her husband. Emma would go to college if it took everything her mother could scrounge for her to do so. Either that or just the hell out of here. Emma’s mother would see to it that she escaped subsistence on this God forsaken hill.

When Emma became a boy-crazy teenager, Elizabeth took the first chance they had to go to the free clinic for birth control. Elizabeth threatened the girl within an inch of her life to not settle for any of those juvenile delinquents who caught her eye at school. They would only lead Emma to a life like her own.

Elizabeth had no concept of feminism or equality for women. She could only mull over the unrelenting disappointment at how things had turned out for her. Directing her daughter away from a similar life seemed the only rational thing to do.

The woman pulled her knit cap down further over her ears and commenced whistling a tune to take her away for the moment. She pinched another wooden clothespin with stiff fingers whose sore knuckles didn’t want to work any more and pinioned another pair of blue jeans to the wire running vertically above her head. The gnarly appendage was hard to recognize as her own when she stuck it through a hole in the knee of the Levi’s. A gaping chasm pulsated inside her much like that worn out place in the denim.

Elizabeth Johnson hung up the last pair of socks, pulled her coat collar tighter to keep the cold wind from traveling down her back, and turned toward the house to go inside. She used the blue and white ticking of the clothespin bag to wipe away an ice-cold tear running down her cheek.

*This post was prompted by Tara’s line, “hung in tatters above her,” from a previous post prompted at http://www.Studio30Plus.com