The Stuff of Legends

Rain swelled the Salt Fork Creek beyond its banks during all seasons of the year, and the murky water flooded the highway badly enough to sometimes close both driving lanes.The scraggly patch of woods stretching out in either direction seemed to shrink in the liquid onslaught. An orange diamond-shaped sign clearly proclaimed, Impassable During High Water. Not everyone could read the words to heed its warning. 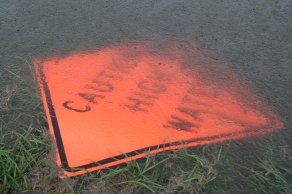 One such resident was rumored to be Bigfoot himself. Local legend had it that Sasquatch lived in those woods, and no matter how saturated they might become at times, he (or IT) was supposed to be running around or hiding out there somewhere. Quite soaked and miserable existence his must be! Some people who believed those tales called the creature “MoMo,” for “Missouri Monster,” but most folks deemed it all hillbilly lore just used to scare little kids out of their wits.

No cliffs or caves were found in those flat lands, so habitat was questionable unless Bigfoot was living in a sinkhole somewhere out of plain view. Nobody could truly say where he might sleep at night. The man-like beast was claimed to be a fearsome sight, over seven feet tall, smelly and covered in dark matted fur. With the current weather conditions, that hair would smell like the worst wet-dog-trapped-in-a-sewer-drain ever imagined.

Not a single soul had actually come in direct contact with it, but multiple encounters were reported to the Sheriff’s Office and television networks about how Old MoMo must have eaten up all the contents of So-and-So’s hen house or attacked some kid’s pony on that farm down by the river bottoms. Other believers reported finding scat that could clog a toilet in any regular human domicile or the remains of small mammals which “no coyote could’ve torn apart like that.”

And the footprints. Oh, the footprints! So many plaster casts were given to the County Museum that Ms. Jenkins, the historian in charge, just started chucking them into a dumpster out back. She told the unsuspecting donors that their bequest would be displayed on a rotating basis, so they should check back another time. A direct rotation into a heap of soil at the city dump was more like it.

Harry, no pun intended, was one of the guys who believed the myths and would say so every time he drove near those whereabouts. He went so far as to cross his fingers and squinch his eyes shut when passing over the Salt Fork bridge to bring himself luck of not running afoul of the monster.  Even if he was the one driving. Best of luck to a fool crossing in the other direction, lest his rusted beater of a pickup pass over the center line into their lane during a fit of his superstition.

After Harry’s initial experience spotting a Squatch out of the corner of his eye, it was hard to get him to go anywhere near that water again. He professed to know, “It’s full of all kinds of creepy crawlies — leeches, water moccasins, crocodiles … or alligators … whatever’s in the cricks ‘round there.” Fishing was no longer in the cards for him after he heard more than Spring peepers one evening when his line was cast in the muddy Salt Fork in hopes of catching that prize flathead. An overwhelming stench reminiscent of a compost pile sweep all around him, and Harry spied something move behind the trees on the opposite bank — too big to be a man — with arms that hung almost down to the ground.

It took a minute for Harry to pick himself up off the rocky bank after falling off the five-gallon bucket he upturned for a seat. He sat on that poor excuse for a chair until he caught something, and then he used it as a temporary live well. Lucky for him, it was empty that day, and he scrambled to his feet and hurriedly tried to dig the phone out of his coveralls pocket. It was an old Nokia bought at a pawn shop, but it could still take a picture. In all the kerfuffle of not hooking himself in the head or losing his rod and reel to the dingy depths, he missed the shot. The elusive being had already dashed off across the field into the distance, but Harry still believed his eyes.

None of his friends did, though. They chalked it up to Harry falling just as far off the wagon as he had off his fishing bucket. He swore from that day forward that he hadn’t a drop to drink but saw an actual Sasquatch. It just got away too quickly, striding across that prairie like its butt was on fire.

The fable ran as deep as the mud in that overflowing creek. Harry lived to tell his story and planned to warn everyone who’d listen to stay away from those parts. Everyone he knew heard the story. He’d worn it out completely. No wonder he couldn’t get anyone to go fishing with him anymore.

*This post was prompted by crocodile at Studio 30 Plus.